Finally had a chance to play around with the official Kinect SDK. First thing I wanted to try, was to link the Kinect SDK to Adobe AIR (with UDP), and adjust my previous kinect demos (with OSCeleton and the open source drivers) so I could do multitouch with the kinect (a bit like minority report). The official SDK is a lot more stable then the open source drivers, and another plus is you don’t need to stand in a calibration position for the skeleton to get tracked. Downside of the official SDK is that it’s windows only… 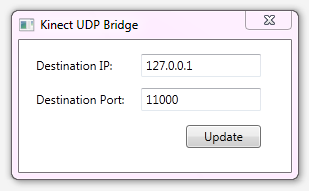 So, I booted up my Windows pc, and threw together a UDP bridge in C#, which sends the skeleton information as a JSON encoded string to a target IP + port. I’ve coded a little adapter in Actionscript 3, which translates the JSON object into TUIO cursors. After that, it was a piece of cake to get multitouch working in Adobe AIR, using the skeleton information from the kinect.

I’m happy to share the C# project for the Kinect UDP bridge, and an AIR sample project, which allows you to transform a square, using the touch events from the kinect. Have fun!

Update: I’ve also uploaded a binary, run setup.exe in the zip file to install. Make sure the kinect is connected when you start up the application.